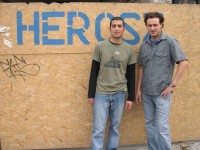 Two young Algerians, Laid (Orestes) and Nadir (Pylades), are travelling 2,000 kilometres south from the coastal regions into the Sahara desert. Laid is being called back to his native village Timimoun to avenge his slain father. Their story takes us on a road trip through Algeria where the two young men experience their country at its most cruel. Along the way, Laid is tormented by the thought of having to kill his mother once they reach Timimoun.
The story told in the dramatic parts of the piece is derived from the novel and film Road to Timimoun by Michael Roes, which is inspired by the ancient Greek trilogy of The Oresteia by Aeschylus – Orestes and Pylades are on their way to avenge the death of Agamemnon who has been killed by his wife Clytemnestra. Roes transports his modern version of the ancient and bloody storyline into Algeria, a country that has been ruled by terror and violence and onto a society that is dominated by a rigid patriarchal Islamic system. The further south their journey takes the two young men the more they enter an archaic world ruled by tradition, religion and a rigid patriarchal system.
At the end Laid decides to not take the path tradition calls for and returns to the north. At the same time the story asks a more general question about the emancipation of a young person – will he fulfil the expectations of family and society or will he choose his own path?