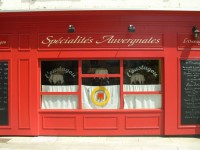 “La Tour Lambert” in the Auvergne. Our chef presents a traditional recipe: a deboned lamb shoulder stuffed with a farce double, a double filling.
With great meticulousness he describes how to make the recipe. Time is the least of his considerations. The detail-obsessed chef is both pedantic and serious about his art. He chops and cleans. The studio kitchen is filled with the sounds of sizzling and hissing. The chef carries us off time and again to the Auvergne where on location he explains the very peculiar traditions of central France. But the longer the recipe takes, the more the scepticism of the hearers grows.
Harry Mathews, the master of deception, has already long entangled us in his literary world of the post-modern, where speech and reality are critically proofed for their veracity.
Harry Mathews, born in New York in 1930, lives is Paris and is a member of the legendary “Oulipo” group around Georges Perec. His novels include “Cigarettes” from 1987, and “My Life as CIA” from 2005.